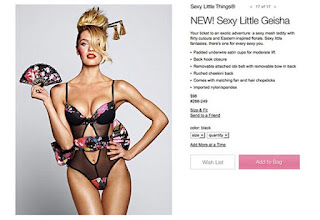 Victoria’s Secret has withdrawn its Sexy Little Geisha outfit after the costume was branded ‘tasteless’ by critics.

The Sexy Little Geisha garment has been ridiculed, calling it, “‘a troubling attempt to sidestep authentic representation of a culture and opt instead for racialised fetishising against Asian women.”

Website, The Frisky, also condemned the costume, stating: “Considering the complicated history of geishas, re-purposing the [geisha] ‘look’ for a major corporation to sell as role-playing lingerie seems a bit tasteless.”

VS heard the criticisms and pulled the costume.