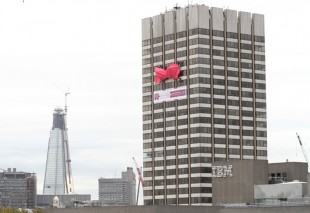 In October 2011, the Guinness book of world records bestowed Chillisauce.co.uk’s 97 foot-wide bra, the esteem of being the world’s largest bra.

Weighing in at more than 165 lbs, the 30 metre fluorescent pink bra first gained recognition when it was fastened around London’s ITV Tower.  The bra was later sold to GoldenPalace.com, during a Breast Cancer charity event in October 2012, for £3,601.  The bra was sold complete with its Guinness World Record certificate.