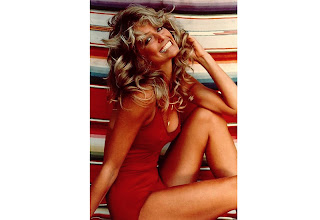 The iconic red swimsuit that made former Charlie’s Angels actress Farrah Fawcett into a star has been given to the Smithsonian’s National Museum of American History.

The piece was presented February 9th, on what would have been Fawcett’s 64th birthday, by longtime companion Ryan O’Neal. O’Neal claimed that it had always been the former actress’ intention to hand the swimsuit over to the museum.

The piece was worn by Fawcett for a photo shoot shortly before her debut on Charlie’s Angels in 1976. Fawcett reportedly did her own make-up and hair for the shoot – without a mirror – squeezing lemon on her tresses in attempt to get natural highlights.

The swimsuit quickly became famous after the poster sold millions of copies, becoming a symbol of the 1970s era and the bestselling poster of all time.

Also donated to the Smithsonian were Fawcett’s book of scripts for the first season of Charlie’s Angels, a 1977 Farrah Fawcett doll and a ‘Farrah’s Glamour Center’ styling kit for creating her signature hairdo.

The items will be part of the museum’s popular culture history collection and will go on display this summer.