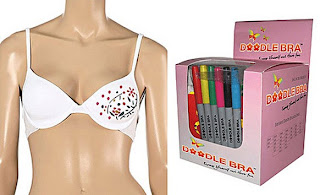 I read about this bra and thought it would be such a great gift idea for a teen girl who may be apprehensive about the whole change to their bodies idea. Rachel Segal is the inventor of the Doodle Bra – a fun, creative and re-designable garment that has created a wealthy buzz in the industry.

The idea came to Segal in the summer of 2008 when she was bored and hanging out with some friends. With nothing to amuse them, they began doodling on Segal’s only white bra with colored markers. Although Segal’s mother’s initial reaction was not entirely pleasant, she quickly changed her mind when she realized this could actually be a marketable idea. So far, Segal’s already sold over 1,000 of them.

Each white cotton bra comes with a set of six non-toxic markers and sells for a surprisingly low price, only $9.99! Also, the ink washes off in the machine, so you can create new doodles all the time. So the lady can design her bra to fit her mood (sort of like Naughty and Nice Lingerie)! It comes in sizes 30AA to 42DD. You can always buy your own white bra, but for $9.99, a bra and markers are a great value!

Doodle Bra also manufactures camis, hats, tops, shoes, bags, panties, capris, swimwear and even accessories that can also be drawn on. The cami sounds like the perfect gift for a young girl that’s about to start using training bras! It sells for only $13.99 on the Doodle Bra website.